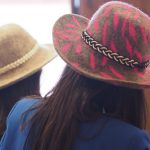 A GESTURE OF AUTHENTICITY

Felt is one of the most innovative and creative ways of using wool for clothing, decoration, and arts. Felted wool is considered as being the first and the oldest textile the prehistoric man has invented. Many civilizations have legends as to the origins of felt making. According to the “Bronze Age Military Equipment book” The Sumerians believed that the secret of felt-making was discovered by Urnamman of Lagash who was a Sumerian Warrior Hero, who traveled widely and was hailed for his courage, compassion, and inventiveness.

Wool is an eco-friendly fabric for humanity. Wool is very useful, protective and a warm fabric that was woven into cloth here in the Bronze Age which began about 1900 BC.

“I have worked with wool all my life as a designer. There’s so much more to it than knitwear – it’s an amazingly versatile material and can be used in so many different ways from chic to rustic”.
Donatella Versace

Wool is an eco-friendly fabric for humanity. Wool is very useful, protective and a warm fabric that was woven into cloth here in the Bronze Age which began about 1900 BC. However, primitive man had domesticated the sheep in 10 000 BC since he realized that killing the sheep for its meal alone was a waste of food and material, and here’s the first ecologic characteristic of this irreplaceable fabric. Wool is a Natural, Warm, and Safe fabric that was and still the favorite for human which gave him what nothing else could give, which is protection from cold, wind, and rain and isolation from heat, keeping him cool in the heat of the day and warm in the cold of long nights. Humans are Humans, driven by knowledge and experiences, the primitive man found a way to use wool as it is giving satisfaction to his basics needs then over time and from generation to generation wool became more than useful but something creative from where we can now create many other types of fabrics. Man can never match it. No other material, natural or man-made, has all its qualities. But man can refine and improve wool. He has done so by selective breeding of sheep and by incorporating in wool fabrics such qualities as shrink resistance, durable creasing, and pleating, mothproofing shower-proofing, and stain-proofing.